The drone's gray zone: who owns the air 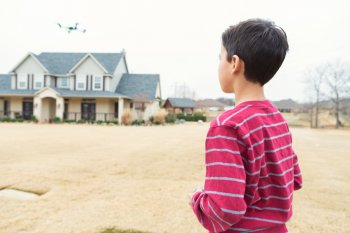 It seems the sky's the limit when it comes to drone popularity. With the Consumer Technology Association estimating more than 700,000 were sold last year alone, chances are drones will soon be buzzing the skies near you. But what happens when a drone flies above your property? It can feel invasive, and some argue it's tantamount to trespassing. It's no surprise then, as companies are selling more drones, others are marketing a wide variety of devices aimed at bringing them down.

The tension between drone owners and privacy proponents is already in full swing. In Kentucky, the self-proclaimed “drone slayer,” William Merideth, took down a drone flying over his Kentucky property with a shotgun. The drone was owned by John Boggs, who filed a lawsuit in January with the U.S. District Court in Louisville, arguing that the government owns all airspace and he should be reimbursed for his property that was destroyed.

This begs the question: who owns the airspace above your private property? And if a drone flies over your property or threatens your privacy, do you have the right to shoot it down? Do you have the right to fly a drone over any public property?  Lawmakers throughout the U.S. are considering these issues, with the Federal Aviation Administration proposing rules and 32 states adopting regulations specifically related to drones, Wisconsin passed a law making it a misdemeanor to fly a weaponized drone,

In Wisconsin, for eminent domain cases, the landowner is considered to own the air within their property lines, up to the minimum safe altitude of flight. This same standard has been applied to determine whether the use of the space over a person's property constitutes a “taking” of that private property under the Fifth Amendment to the U.S. Constitution. Actions outside this block of air have generally not been considered a taking, even if the actions had adverse consequences for the private property.

The Wisconsin Supreme Court has determined that physical invasions of super-adjacent air space may constitute a taking, particularly if they happen often enough to have a direct and immediate effect on the enjoyment of the property. Such cases historically have related directly to aircraft takeoffs and landings.

Yet drones can fly far lower than an airplane, and in a time when drones are being used more and more by law enforcement, news media, delivery companies and private individuals, the legal repercussions of drone flight within the airspace over private property are still being determined, As these nimble devices can take off and land almost anywhere, it's clear that the gray area of airspace property rights will be a hot issue for the courts and legislatures.

The FAA hopes to finalize rules relating to drones by June—rules that reportedly do not weigh in on the property rights issues, but recommend that commercial drones can't be used over a person not directly involved in the operation. Private drones, like the slayed and downed drone owned by Boggs, are also not addressed. For now, private homeowners may want to hold their fire and instead file a complaint of trespassing or nuisance against operators of low-flying drones over their private property.

Article by Joe Veenstra, La Crosse Privacy and Consumer Lawyer. For a privacy lawyer in La Crosse WI, call him at 608-784-5678.

Legal requirements for marriage in Wisconsin