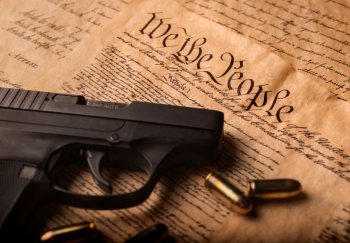 Wisconsin courts have long allowed gun owners to openly carry handguns but not concealed weapons. The Wisconsin Legislature changed that law in 2011.

“Gun rights supporters have won that right on every stage in legislatures across the country including Wisconsin,” said attorney Terry Collins, who enjoys hunting along with other outdoor sports.

To carry a concealed weapon, a gun owner must have a permit. He/she must be at least 21, pass a criminal background check and complete a gun safety course. Convicted felons and those with certain mental illnesses are ineligible.
The law permits loaded handguns or loading guns in a vehicle, boat, all-terrain vehicle and even a noncommercial aircraft.

However, rifles or shotguns may not be concealed. If long guns are transported in a vehicle, they must be unloaded and enclosed in a zipped, snapped, buckled, tied or otherwise fastened case with no part of the firearm exposed.

Concealed weapons are not allowed in a courthouse, police/sheriff station, public building, state parks or where otherwise posted.

Collins said Wisconsin has the Castle Doctrine, which means you could use your firearm to defend your home from an intruder. The Castle Doctrine allows you to shoot that uninvited person on your property. “The law puts all the burden on the person who was shot,” he said.

Wisconsin does not have what is known as a Stand Your Ground law, which would allow you to use your firearm to defend yourself outside your home if you believe your life is in danger. Under that law, you don’t have to back away from the situation but can confront the person.

Collins noted a topic little discussed in gun issues is suicide – more than half of the gun deaths in the United States are from suicide.

“We are now an armed society,” Collins said. “Whether we are a polite society has yet to be seen.”