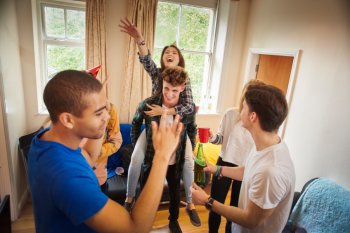 If you have a teenager, chances are you’re gearing up for prom and graduation season.  But if alcohol becomes part of those special events, both you and your teen stand to get in serious legal trouble.
It’s not uncommon for parents to host those celebrations, reasoning that if their kids will be partying at least they’ll be doing it in a safe, supervised environment. That’s the sort of reasoning, though, that can cause some of the biggest problems.
Here’s what you need to know about underage drinking in Wisconsin:

Of course the best advice is to host an alcohol-free party. If it’s a party that involves adults and you want to have alcohol for them, take care in how you serve it. Serve all alcohol, such as beer, in marked containers, and require minors to drink only from clear glasses or soda cans, so you can be sure they’re not imbibing.

If the legal implications don’t have you convinced, consider these facts from the Office of Juvenile Justice and Delinquency Prevention:

When you consider the legal consequences as well as the social and health implications, underage drinking is nothing to celebrate.

Prom, graduation and alcohol: what's a parent to do?