Should you take your spouse's name? 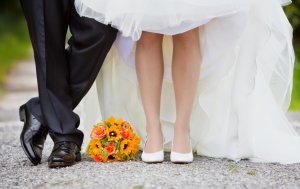 Nearly 30,000 Wisconsin brides each year must decide whether to change their names when they marry. Among those, roughly 60 to 80 percent do take their husbands’ last names. But just because the majority chooses one way doesn’t mean that same choice is right for you.

Choosing whether to take your groom’s name is a personal decision and can be complicated. Many find it’s as much (or even more) social as it is legal. Both are important, but the legal considerations are often overlooked.

Socially, many couples believe they’ll feel more like a family unit because they’ll have the same last name. Others will hyphenate names so they can keep their own identity while still having the same last name as children. Still others are choosing to fuse both last names — turning Mr. Brown and Ms. Green, for example, into Mr. and Mrs. Breen.

Practically speaking, one last name for the whole family is just plain easier for many couples. Schools have an easier time matching kids to parents, and other parents matching moms and dads to kids. It also makes it easier for other brides and grooms to know how to address wedding invitations without offending anyone.

One challenging area will come for women who have careers that involve a lot of relationships or where name recognition is important. If that’s your situation, you’ll have some extra work to do to maintain connections as your name changes.

That’s the social side. It’s often the legal side, however, that makes or breaks the decision, and it comes down to three factors.

First, if you’re going to change your name you’ll have a lot of paperwork to do. You’ll need to take a number of steps such as sharing your marriage certificate with your bank to change names on your accounts, visiting the Department of Motor Vehicles for a new driver’s license, updating your Social Security account to reflect your new name and switching out your passport. If you’re a professional, it also means new business cards along with changes for licensing, association memberships and the like, which brings us to the next legal consideration.

Second, if you marry someone with debt issues and take his name, creditors will be able to more easily identify you as someone to make good on the loans. Legally, you take that risk anyway because Wisconsin is a marital property state, but taking the name, too, gives creditors another avenue.

Finally, as difficult as it may be to imagine when planning your wedding, half of all couples really do get divorced. If you become one of those couples, you’ll have to face the decision — weighing social and legal pros and cons — all over again.

Legal requirements for marriage in Wisconsin